Why World Elephant Day? Because the world’s elephants are in trouble and need your help.

Elephant numbers have dropped by 62% over the last decade, and they could be mostly extinct by the end of the next decade. An estimated 100 African elephants are killed each day by poachers seeking ivory, meat and body parts, leaving only 400,000 remaining. An insatiable lust for ivory products in the Asian market makes the illegal ivory trade extremely profitable, and has led to the slaughter of tens of thousands of African elephants. Between 2010 and 2014, the price of ivory in China tripled, driving illicit poaching through the roof. If the elephants are to survive, the demand for ivory must be stopped . As of 2011, the world is losing more elephants than the population can reproduce, threatening the future of African elephants across the continent. Bull elephants with big tusks are the main targets and their numbers have been diminished to less than half of the females. Female African elephants have tusks and are also killed, which has a terrible effect on the stability of elephant societies, leaving an increasing number of orphaned baby elephants. There are still more African elephants being killed for ivory than are being born . . . elephant populations continue to decline.

Elephants cannot be manufactured. Once they’re gone, they cannot be replaced.”

—Dr. Iain Douglas-Hamilton, DPhil, CBE, Founder and CEO of Save the Elephants

The Asian elephant, whose habitat ranges over 13 countries across Asia, is an endangered species with less than 40,000 remaining worldwide – less than a tenth of the African elephant population. Wild Asian elephants suffer severe habitat loss in some of the most densely human-populated regions on the planet. Their traditional territories and migration routes have been fragmented by development, highways and industrial mono-crops such as palm oil and rubber tree plantations, which has destroyed millions of hectares of forest ecosystems. With no access to their natural habitat, elephants are forced into deadly confrontations with humans where neither species wins. Asian elephants are also poached for their ivory tusks, meat and body parts while baby elephants are captured from the wild and sold into the tourism industry. Worldwide, Asian elephants are trained, traded and used for entertainment in tourist parks and circuses, and also for illegal logging activities. These captive elephants are often mistreated, abused and confined to sub-standard facilities without adequate veterinarian care.

I have spent hours and hours watching elephants, and come to understand what emotional creatures they are…it’s not just a species facing extinction, it’s massive individual suffering.”

Elephants and humans share a long history throughout our civilization. The expanse of the African habitat and the enormous size and aggressive posture of the African elephant has allowed it to resist captivity. But the Asian elephant has lived alongside humans for over 4,000 years and is imbued with reverence, tradition and spirituality across many cultures. In Thailand, the elephant is a national icon: it has a national holiday designated in its honor and elephants can receive a Royal title from the King.

Yet while elephants have lived alongside humans for so long, there is still much we don’t know about them. With the largest brain of any land animal, they are smart, sentient, social and empathetic, qualities we strive for ourselves. We share so many characteristics with elephants that they may well be more like us than any other animal. But we are risking their future and, in the process, damaging the integral habitat required for biodiversity throughout Asia and Africa.

Elephants are a keystone species. It means they create and maintain the ecosystems in which they live and make it possible for a myriad of plant and animal species to live in those environments as well. The loss of elephants gravely affects many species that depend on elephant-maintained ecosystems and causes major habitat chaos and a weakening to the structure and diversity of nature itself. To lose the elephant is to lose an environmental caretaker and an animal from which we have much to learn.

Without elephants there will be major habitat changes, with negative effects on the many species that depend on the lost habitat.”

We can save elephants by implementing stronger protection policies for wild elephants at both local and international levels of government; stronger enforcement and legislative measures against the poaching and illegal trade of ivory; better management of natural elephant habitats; better education about the vital role of the elephant in ecosystems; more viable alternative economic opportunities for those whose livelihoods depend on elephants; improved treatment for captive elephants; and, where appropriate, reintroduction of captive elephants into protected sanctuaries that allow a natural replenishing of endangered populations. These are just some of the goals that numerous elephant conservation organizations are focusing on around the world to prevent the extinction of wild elephants and the destruction of their habitat, and to improve the quality of life for those elephants in captivity.

Elephants are running out of space and time. Before we know it they will be gone — unless we collectively stop the senseless poaching and consumer demand for ivory, and allocate protected natural habitat in countries where elephants and other wildlife can thrive now, and in the future.

Because without elephants, just what kind of world would it be? 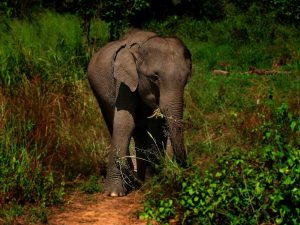