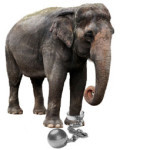 One out of every three Asian elephants left in the world is a captive animal.

Recent research suggests that captive elephants suffer long-term depression over the trauma of their capture and captivity, as well as drastically shortened life spans.

The famous elephants from the Ringling Bros. circus performed for the last time on May 1st, , 2016. They are now retired in the circus’s conservation center.

The African elephant weighs 22,000 pounds and is the planet’s largest land animal.

The Asian elephant is the second largest, weighing around 10,000 pounds.

An elephant’s trunk has more than 40,000 muscles, more than all the muscles in the human body. They can tear down trees or pick up a blade of grass with their trunks.

Elephants have the longest gestation period of any animal at almost 22 months. A newborn elephant can weigh up to 260 pounds.

At 11 pounds, the elephant has a brain that is larger than any other land animal in the world. 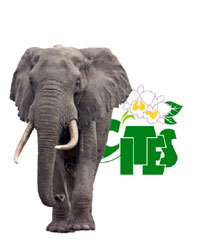 In 1989, CITES (the Convention on International Trade in Endangered Species) issued an international ban on the ivory trade. Despite this, legal trade still exists in many countries, including Japan, and the black market continues to do a brisk business.

2013 saw the greatest quantity of ivory confiscated in the last 25 years.

May 2016, Kenya showed that it has zero-tolerance for the illegal ivory trade by torching 105 tons worth of ivory. The largest ivory burn in history.

June 2, 2016, the United States adopted a near total ivory ban (essentially prohibiting all commercial import, export, and interstate trade of African elephant ivory with some few, limited exceptions). As of summer, 2017, a ban that includes the outlawing of intrastate sale of elephant ivory has been codified into law in California, New Jersey, New York, Hawaii, Oregon, Nevada, and Washington State. Similar ivory ban legislation is currently underway/being considered in Nebraska, Pennsylvania, Delaware, and Massachusetts.

At the end of December, 2016, China announced it would close its legal trade by the end of 2017. By the end of March, 2017, it had closed all its carving factories, and it plans to phase out its ivory retail shops by year’s end.

France announced an ivory ban in August of 2016.

In June of 2017 Hong Kong launched a bill that would ban the import and export of worked and raw ivory by 2021.