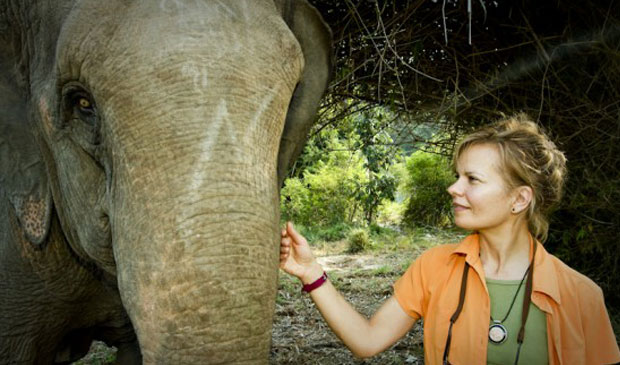 Life as an Elephant

It’s not easy to be an elephant these days. African elephants are threatened by the relentless poaching frenzy that is slaughtering over 100 elephants per day throughout Africa.

Asian elephants, are critically endangered by rapid habitat loss, causing them to raid croplands in search of food, leading to deadly conflicts with humans, poaching, or capture, and a life of captivity in zoos, tourist shows or logging camps. For us, life as a human is challenging enough. But for elephants, is there any hope?

This was the question I asked myself four years ago when I began my passionate pursuit to understand the critical problems for elephants that are caused by humans. In my work as a filmmaker I have made several films about animal conservation issues and I’m particularly intrigued with the notion of animal consciousness and self-awareness. Mirror self-recognition testing is used to demonstrate self-awareness and it has been tried on several species of animals. The ones that nearly always pass the test are the dolphins, the great apes, and the elephants. In light of the problems we as a species create for these creatures, I sometimes wonder how many of us are self-aware.

Elephants possess all kinds of remarkable abilities and qualities that we would do well to aspire to have ourselves. With the biggest brain of all terrestrial animals, they are smart, empathetic, have strong emotional bonds and family ties, long memories and sophisticated ways of communicating with each other that we are only beginning to understand.

We’ve had a long history with elephants. For 5,000 years they have been used in warfare and industry and essentially helped build early human civilization. But with the advances of our civilization has come the demise of the elephants‘ domain. As a result, human-elephant conflict throughout Asia and Africa has led to an outright interspecies war for food and habitat, causing loss of lives for both species. Asian elephants have been heavily used in the logging industry in Thailand and still in Myanmar, where they are worked as machines, decimating what remains of their forest environment.

At the other end of the spectrum elephants are often the star attraction at zoos, circuses and tourist parks around the world. In some cases they are born in captivity, in other cases they are captured from the wild as young elephants and trained to do tricks, paint pictures, take tourists for rides – all for our amusement. Yet seeing elephants in this way teaches us nothing about their true behavior or natural lives. Is this the future of the human-elephant relationship? My journey to find the answer has led me to Thailand where I have become embroiled in the realities of life as an elephant.

Asian elephants are an endangered animal. There are less than 50,000 left in the world – that’s less than the capacity of an average football stadium. In Thailand where the elephant has been revered for millennia and is a national icon, their numbers dwindle below four thousand. My work here for the past two years has led me from the tourist camps to the gritty underworld of the street-begging elephants and the elephant “business”, to the traditional rural elephant villages eroding from the pressures of modern society, to vast and beautiful wilderness sanctuaries where some elephants may still have a chance.

At present, my team and I are in the process of making two elephant films: one is a story that reflects the human-elephant condition called Elephants Never Forget; the other is about the work of the Elephant Reintroduction Foundation – an innovative organization and initiative of HM Queen Sirikit of Thailand to rehabilitate and release captive elephants to a free life in wild forest habitat. Through these films I hope to express and share not only the awe and wonder that I have experienced spending time with these magnificent creatures, but the tragedy that awaits if we, collectively as humans, don’t do something to stop the exploitation, abuse and slaughter of one of Nature’s greatest creations. There are solutions to the elephants’ plight and our awareness is the first step. Life as a human would certainly be far less meaningful if there was no life left for elephants