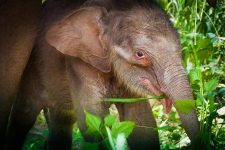 Get Ready for World Elephant Day 2017!

World Elephant Day 2017 is almost here and it’s time to rally the troops once again to bring the world together on August 12 to help elephants. It’s hard to believe that this is our sixth year of awareness-raising about the elephants and their plight – an indication that there is still much work to do.

Since our inception in 2012, the World Elephant Day team has been comprised of a small group of dedicated and compassionate people who have diligently worked on maintaining its website and its educational content and performed the social media outreach necessary to fulfill the mission of World Elephant Day. But none of this would be possible without your support and acknowledgement of this day’s significance. We are grateful to all of you – from scientists to NGOs to individuals alike – for coming together at this time to do whatever you can to speak out about the issues that elephants – and all wildlife – are facing.

In review, so much has happened for elephants since the last World Elephant Day. Over these next few weeks we will be putting a focus on some of these accomplishments, as well as on the many issues that still need action.

Some of these issues include:

A commitment to solving these problems ultimately requires our recognition of the true value of what the elephants bring to us – their uniqueness and their mystery – and their irreplaceable worth to humanity and the planet. This recognition has inspired us to create a theme for this year’s campaign, which we are calling “BEE” – “Be Elephant Ethical.” The various ways to BEE may come into play if you have the good fortune to encounter an elephant in the wild, at a wildlife sanctuary, an elephant camp, or a zoo. We believe that the ways to BEE remind us that we should treat elephants the way we would like to be treated ourselves.

Thank you for choosing to “BEE” with World Elephant Day this year! The 2017 Events Page is up and running so please let us know what you’re planning by posting your “Elevents” here. We’re looking forward to sharing all the exciting and important work that people everywhere will be doing for the elephants.

As a final thought we’d like to share with you a prescient message that the renowned French writer Romain Gary (1914–1980) wrote to the elephants, as expressed in a letter published in LIFE magazine in 1967, fifty years ago:

“In my eyes, dear Elephant, sir, you represent to perfection everything that is threatened today with extinction in the name of progress, efficiency, ideology, materialism, or even reason, for a certain abstract, inhuman use of reason and logic are becoming more and more allies of our murderous folly. It seems clear today that we have been merely doing to other species, and to yours in the first place, what we are on the verge of doing to ourselves.”